There is an issue with edges handling in cases when a Decision component is duplicated in canvas.
The common thing is that edges that were originally modeled are shifted or removed.
There are two cases described in Steps to Reproduce, differentiated in the order of actions that took into the situation, but model-wise are supposed to be identical.

The resulting models upon reopen:
Top-bottom case (the lower node is a duplicate): 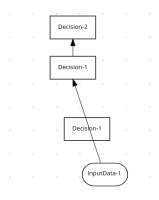 Bottom-up case (the above node is a duplicate):