We have setup a docker compose based project for reproduction (see "steps to reproduce"), that just does direct grant based authentication requests in a loop. The SSO Session timeout is set to 10 minutes. We could reproduce the issue in standalone and standalone HA mode.
This is probably not limited to "direct grants", but this might facilitate the problem, because neither a logout nor fetching of already timed out sessions happens.
While (voluntarily) limiting the heap to 256M the OOM happens after about 90.000 requests.

Here are the results for a test run. The used heap memory goes up, until it hits the limit: 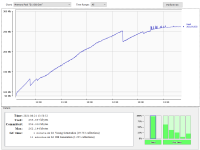 Meanwhile the cache statistics show, that the expiration is working fine:

These objects don't get garbage collected, even after a forced GC:

A heap dump analysis shows that those objects are still referenced by infinispan DefaultSegementedDataContainer:

KEYCLOAK-16755 Check if ClearExpiredUserSessions can be optimized or removed

KEYCLOAK-11683 Too many USER_INVALIDATION_EVENTS in keycloak heap